Today I want to talk about sluts.

So, I have been working on developing a set of stickers centered around the phenomenon known as Slut Shaming or Slut Bashing.

Why, what is Slut Shaming? I’m glad you asked!

My Definition: Slut Shaming is when a person, 0ften someone who identifies as female (but this person can also identify as male) is met with harsh criticism, judgmental and downright hateful behavior for being perceived as a sexual being.

Here are some other great definitions:

This is when an individual…is judged to be of low moral character or otherwise lacking in basic human rights because of what she wears and who she chooses to have sex with. Essentially, it reduces a woman to a sex object, and then vilifies her if she has the gall to take ownership of her own sexuality. (Morgan M Jordahl)

Cruel words like slut, whore, “ho” (and worse) are used to make a woman feel worthless, disgusting and ostracized for her sexual feelings and desires. (Dr Laura Berman)

“Slut shaming” refers to the practice of criticizing a woman for engaging in certain sexual behaviors outside of traditional gender roles, whether it be actual or presumed based on her manner of dress, speech or personality. (Amanda B.)

Some feminists have actively participated in slut-shaming on the basis that it’s not feminist to have sex with a lot of men.

Slut Shaming is especially viral on the internet: 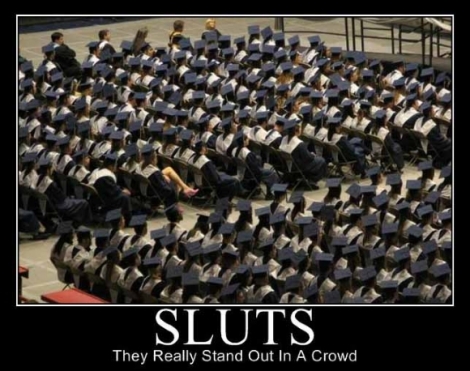 So, What’s The Problem With Slut Shaming?

Internet memes, novels, tv shows, classrooms – slut shaming is literally everywhere. I even found a prime example of it on Etsy:

You can purchase your very own slut-shaming hand-made art!

So, we need to start taking some very real action to end slut shaming:

I Will Not Slut Shame

Some Great Sites For Further Research:

4 responses to “But Is It Feminist: Slut Shaming”

Want To Get A-Hold of Me?

PO Box 201 Everson PA
15631
calliegarp@gmail.com
I love hearing from readers, feminists and other artists. Drop me a line sometime :)